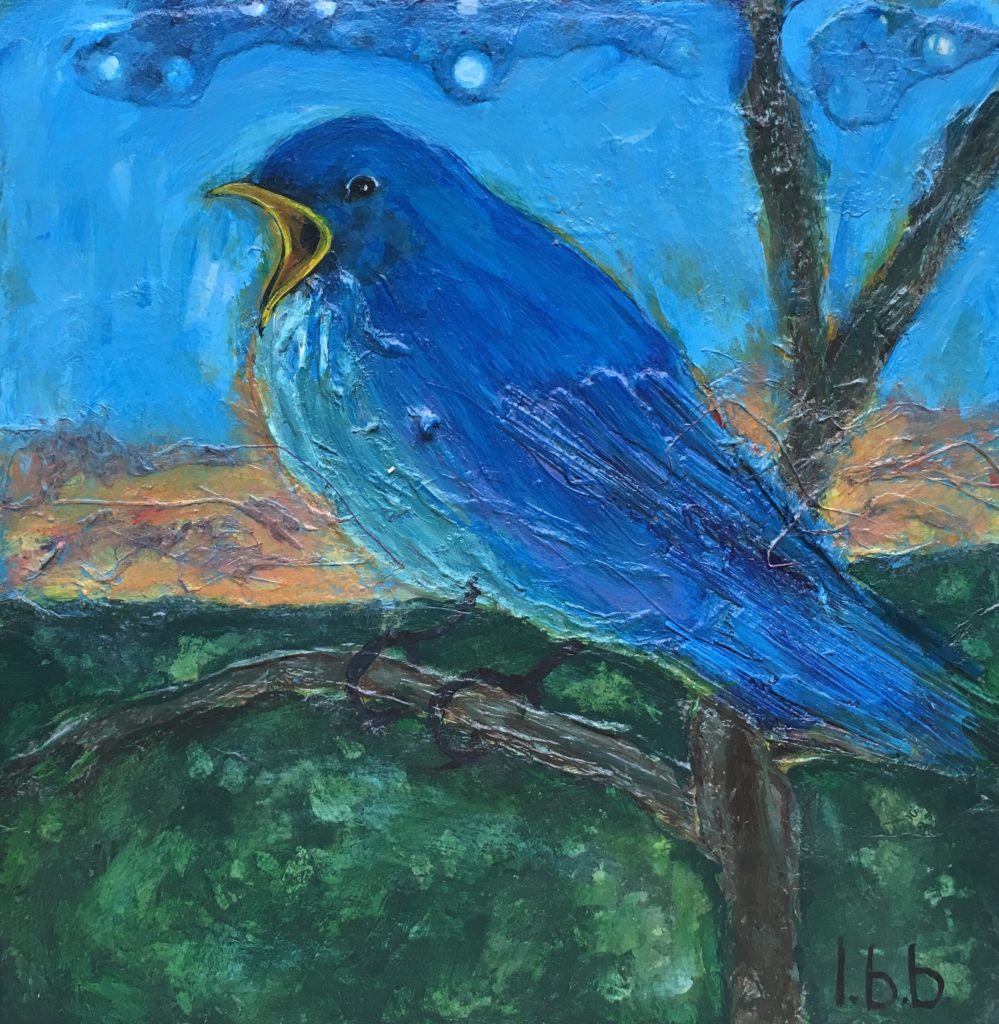 How does Bluebird bring so much happy in the midst of trial? Even when life seems hopeless, he sings. Mountain Bluebird was one of several forms that Spirit took that day.

We had miles to drive before reaching the trailhead and getting out from under dark clouds. Traffic was sparse, reminding us of another dark cloud, surging virus numbers. Authorities had canceled the Independence Day parade. Nevertheless, birds and animals processed.

One by one they appeared to us with medicine. Coyote’s laughter, Deer’s gentleness and Raven’s invitation to faith that can only be strengthened in the void.

Female elk and their calves roamed freely, as a few males stood watch over the herd. We were in awe. Spirit had awakened quietened energy within us.

As we continued driving, a burst of joy flew across our path. In a world where people typically feel the need to conquer and seize or bob and weave, Bluebird’s authenticity aroused my courage.

Mountain Bluebird did not stay hidden, nor try to be eagle, lion or bear. He simply offered himself. Isn’t being true the best any of us has to give?

The tiny feathered one had no need to pretend that things were better than they were. He was not cynical, nor did he insist that we share his joy. Instead, he brought relief.

The Jesus of my childhood, was not like the one we often hear of, today. He considered the lilies and the birds. He healed people as they crossed his path, and taught his disciples to meet those who were poor in spirit, by asking questions and then listening, as opposed to talking at them.

Jesus did not shame nor exclude people either directly or through innuendo, but rather fulfilled the harsher sounding prophecies, with love. He calmed the storms for frightened people. When circumstances were horribly threatening, he wept under a night sky, bringing his own divided-ness together in wholeness.

Jesus never asked anyone to worship him. Like Bluebird, he celebrated life by being true. And like Gandhi, he lived into the changes he envisioned, for a better world.

Do the mountains and trees ask be praised? How is your need for recognition or acceptance hindering positive change in the world? Why not be the praise!