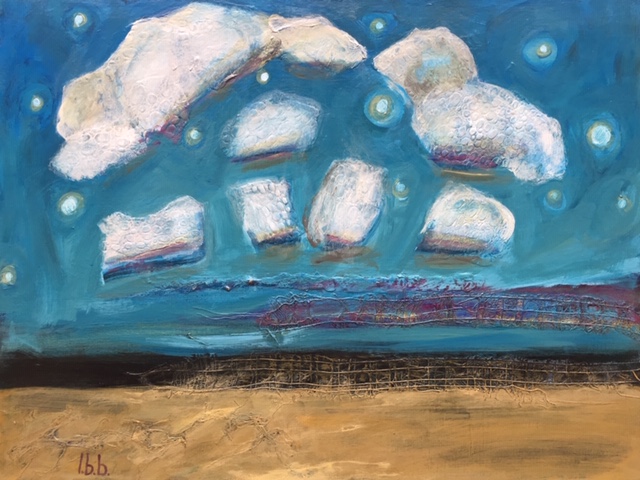 It was early morning, long before sunrise. Dark rainclouds capped the horizon. Up higher, spotty clouds kept me from seeing a night sky full of stars. I felt drawn to playful prayer.

I prayed, imagining the clouds as people’s fear, anger and sadness. What began as a bountiful intention toward those held captive by negative emotions, during the pandemic, turned intimate. What if I took this time to release every person who had ever held me in contempt, and the other way around?

Whether my fault or the other’s, could I disperse personal clouds, by sending gratitude for every experience? Though my motivations are rarely so pure, I made the most of my momentary generosity.

Memories of events that I had long forgotten, met fresher ones. Each was different, yet the same, like kissing bears coming out of their winter slumber. In the quiet, I released myself and every other person, offering forgiveness.

Two hours passed and the upper sky was clear. I was under no illusion that I could say, “Poof,” and make clouds disappear. Nevertheless, as I humbled myself, the clouds dispersed.

Before dawn, I set an intention to lessen some of the billowing negativity in the world. As I cleared my own heart, hope replaced uncertainty. The miracle was not that the sky cleared, but rather that my heart had, making room for compassion.

And this is how Spirit plays with us.

Though acquiring knowledge is stimulating, it individualizes us. A love relationship with the Holy; however, invites us to a lively connection with everyone, and everything. Then, the Golden Rule, sounds less like a command, reading more like, Remember: Whatever you do to another, you are also doing to yourself.

At a point, I looked up to see sparkling stars. Though rainclouds on the horizon remained, it was only a small strip in the vaster expanse. Soon, vibrant pink strokes appeared across the dark band.

Playful prayer opened me up to a night sky full of hope. I smiled and wondered if anyone, for whom I had prayed, had awakened, feeling renewed.

How have you and Spirit played recently?