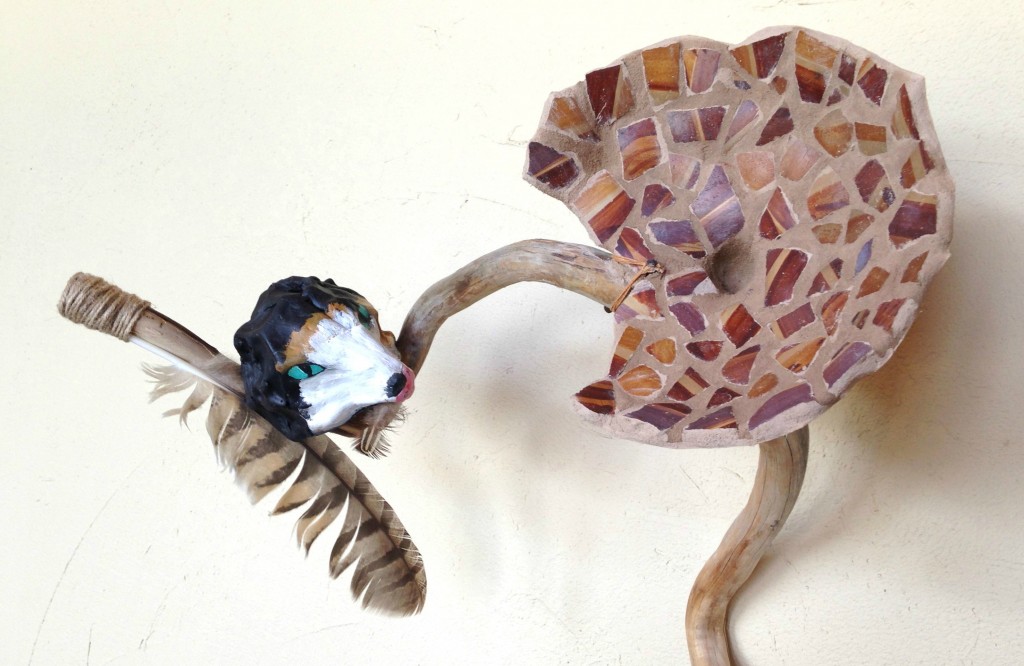 I would have loved a ritual stick while navigating my way through the dark night of the soul. I spent too many hours, journaling words. But even without the prompting of a visual reminder, the thought of a ceremony felt befriending.

As the vague lingered on, I began guiding my energy toward embracing life as a mystery, rather than approaching it as a problem to be solved. Creating a birdbath with clay shards was the image that kept rising up to describe my brokenness and my hope.

Daily, I hammered, breaking ceramic pieces that represented individual claims that I had given to values and ideals, those things that I thought I, and others, needed to embrace.

Tears streamed down my face as I pounded bowls and plates, creating the chards that served to break through the now noticed misplaced power.

The act itself, gave me the personal confidence I needed to release others and begin visualizing my scattered parts coming together as a collective whole. It felt like the most loving prayer I could pray.

Finally completing the physical part of my ritual, I filled my birdbath with water and watched as a bird came to preen. She invited me to playfulness, but as my hope began rising, a cat jumped up on the bath and enjoyed lunch there.

I was horrified, but, why? Cats prey on birds. So now what? Would this be a bath for birds or a feeding trough for cats? I had every intention of creating a lovely place for birds. Instead, I had taken this particular bird’s life. I felt as though Wisdom was speaking and I needed to pay attention. What did it mean?

Obviously, the ritual had taken a sharp turn. This was not the ending that I expected, but something in the going through it, and its outcome, introduced me to being present to what is and looking for God there instead of giving so much consideration to the outcome.

I was clearly shaken, but afterwards, I began living more intently in the present, accepting paradoxes on a deeper level and letting go of a few more of my tidy, pre-pictured endings.

Even though my dark night began over twenty years ago, I often think about the abrupt turn the birdbath ritual gave my life then and now. Though unpleasant at the time, it freed me in ways that have continued to feed my soul.

The dark night became less about something to analyze or endure and more about the story that the Holy, and I were writing. It was a pilgrimage and I was finding deeper trust, in the Sacred within, as I allowed life to unfold rather than forcing the journey toward a preferred ending.

Even now, as I think back to my birdbath ritual, I watch a cat in our flowerbed, waiting for the birds that usually gather there. Cats will be cats. I feel my heart beating a little faster, but this time, not as much for the little birds as for our neighbors’ beloved pet. You see, earlier I saw a hefty hawk, and well, hawks will be hawks.