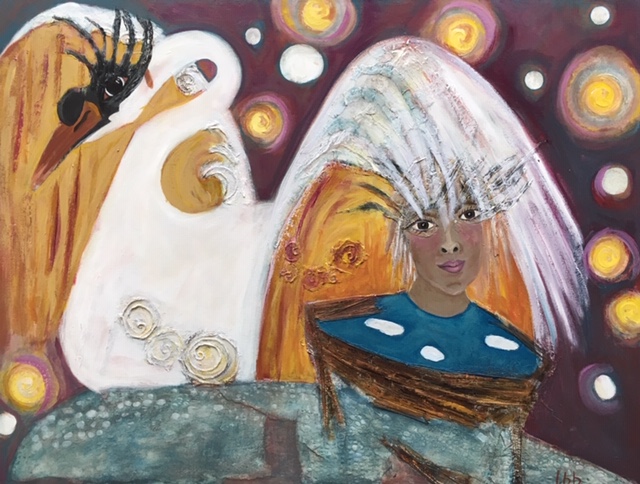 My prayer boat drifted into Dreamtime. There I was, gliding on the water, in between past and future. It was a peace-filled sanctuary on top of Whale’s back and neath Swan’s wing.

My intention was as safe as lighting a single candle. Whale embodied the history. Swan illuminated my future. Together they took me to a vast winter landscape and a blazing fire.

Flames confronted my neatly organized truths. It was clear how in holding too tightly to particular principles, I had also held on to suffering. I needed to be swept away. To step out in faith; however, I had to let go.

I wanted to live in the Light, but also be light. Was I willing for everything except love, to gradually burn away?

Being embraced by Light is cozy and the other, full of sacrifice. It would not be a grand, noble sacrifice, where in the end I would be hailed a heroine, but a deliberate opening to people as they lived out their journeys, which at times would be at my expense.

To be light, I had to enter the dark womb alone, where Spirit could brood over and recreate me.

Each time people projected their prejudices on me, I wondered how I too, had whittled sacred souls down to other.

As love deepens, we see through facades. But why do we want to see, if not to prove ourselves right or the other wrong? Listening to another person, as if we know nothing, requires a wide open sanctuary where everything but love, finally drifts into the transforming fire.

But life is also entertaining, when we detach from particular results. If we drop our defensiveness and instead curiously observe, we begin hearing wondrously wild invitations to abundance and joy.

Periodically, we need to step away from giving intellect superiority and move toward awe. On that particular night, Whale and Swan provided a sanctuary that offered rest to my overactive mind, so I could experience unexpected wonder.